Boots licking slave and serving a Mistress wearing a pair of hot sexy boots is one of the earliest fantasies for most of the guys out there. There is something simply irresistible on a woman walking around in boots and we all know it. Actually, girls know this very well, much better than you might think and most of them are enjoying to see guys staring at them. If they say different, be convinced that they are not telling the truth.

You can probably remember your first time when you noticed a bulge in your pants immediately after you had a chance to be in close proximity of a girl in sexy boots. Even if it is very naive, it is a life changing experience and something that will shape a person’s sexuality for the rest of his life.

Before getting into details about boot worship and boot slave, I would like to mention that like everything in life, tastes are different. Some guys are turned on only by shiny leather boots while other ones have a preference for other materials like latex, PVC, nylon mesh, etc.

What is interesting is that next thing directly related to boots fetish is the size and shape of this footwear. Just like with the above mentioned, personal preference is the one deciding what will be top rated turn on. High heels, flat boots, motorcycle boots, now popular harness boots or maybe expensive hot over knee boots this blonde Goddess enjoy wearing.

Anyway, today’s update is about boot cleaning of a high heel pair of boots. The difference compared to other boots cleaning scenes featured on this site is obvious. Instead of classic slave licking scenarios where a Goddess is demanding proper hygiene of her boots, in this scene, lucky slave already knows his place. Clearly, he was subjected to rigorous slave training before.

While slave is lying down on the cold concrete, sub already knows his purpose. Basically, his only role is to be kind of a human doormat. On high quality photos you are looking at, you can see every detail, including the most important one and that is quality of workmanship of these boots. They are expensive, almost new and I can bet that opiating scent of that leather can be felt a mile away. Heels sucking, soles licking, dirty boot cleaning 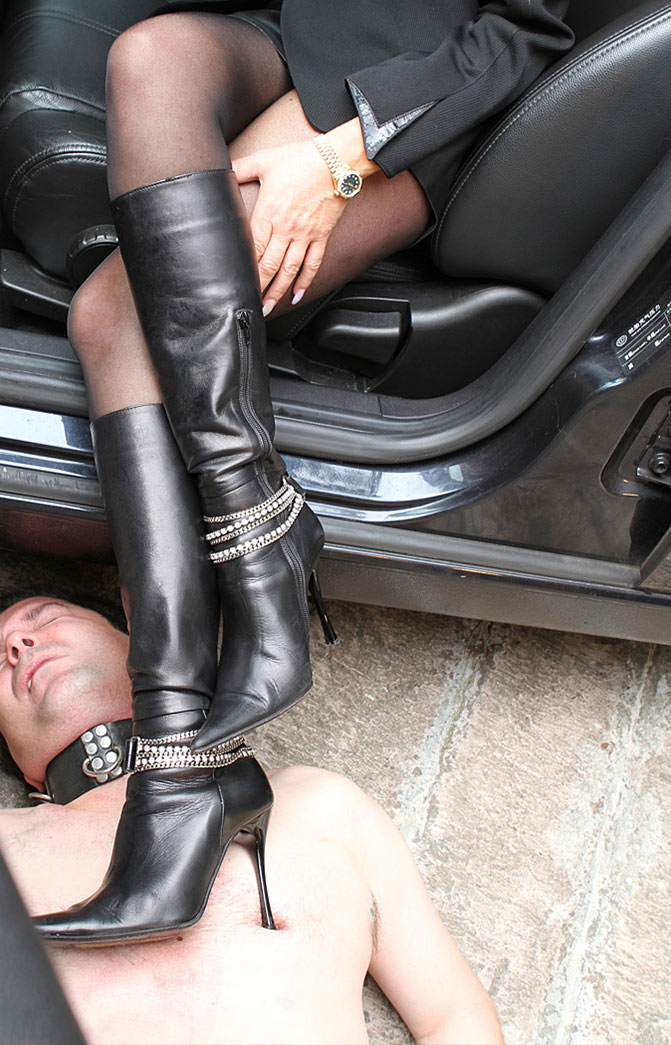